This post is off the topic. But it has to do with the sustainability of food and community building at NYU; this happens to be a major part of what Project Avocado is supposed to represent. I did not know if I should have posted this, because it happened about a month ago, on May the 17th, 2016. However, I decided to write a note on this, because of the vision of Project Avocado.

NYU hosts Grad Alley each year. This year, it was better and more fun than ever. What better place for food to be other than a fair-like event. A multitude of companies had set up booths and tents, showcasing their food products. Where there is food, there is also food waste. But NYU had taken care of it, through the Green Team, a set of volunteers, recruited by the Office of the Sustainability.

I was a part of the Green Team, which was in-charge of taking care of the garbage and recycling. Since there was prior knowledge of the foods and the kind of containers they were inside, the garbage was divided into three sections: Mixed Recycling, Compost, and Landfill. The image below shows the details of how the food was to be sorted. 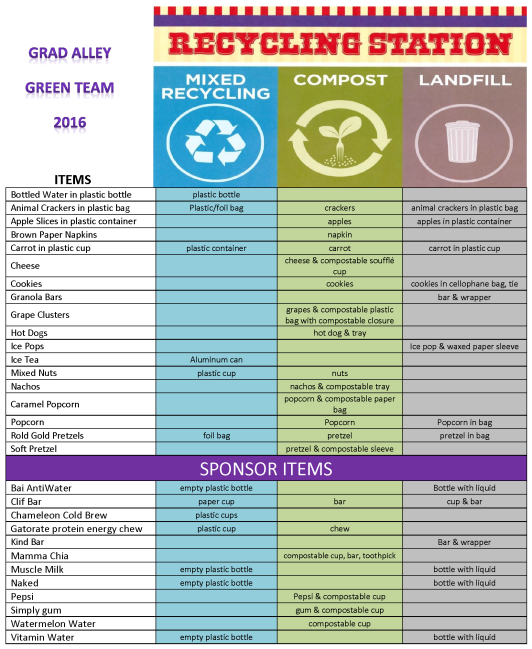 There were 6 recycling stations, each of them being manned by two or three volunteers. We were stationed at one of the extremities of the grad alley, and naturally, we had to be vigilant, so that each piece of trash went inside the right bin. One of the amazing things I observed was that, when someone threw the garbage inside the wrong bin, they were mindful and tried to take it out, so that they could put it inside the correct bin. But there were ignorant people as well.

The reason we were stationed at the bins was so that the wrong trash was not inside the wrong bin. The second reason was to create awareness about sorting trash and recycling. It was really nice to see that people care about recycling, and I would like to think that our goal was achieved… Mostly.

Now for the twist in the story:

How is it that when free things are given, people don’t care, even when they are in need? I could not believe when I saw people throwing away containers of unopened food into the trash! Wait, what? Why would one throw away packets and containers of food, when  they are not even opened? I can understand that many might not like to eat raw fruits and vegetables, people might be allergic to nuts, there might be plethora of other reasons. But is it too difficult to take them with you when you go back home, and if you don’t like them then give it to someone? I mean, they are completely sealed off and won’t create a mess on your hands. And, if allergies was a reason (or not), then there was always an option to not take something. Well, there is no point in ranting about this, because the Green Team did what we had to do… And actually, a bit more.

As and when we saw someone throwing away unopened and packed food, we grabbed it and put it inside a bag. There were six recycling stations. The following picture shows the amount of food saved by our station. Imagine how much all six stations were able to save!

Of the kinds of foods I saw, the pretzels were the most discarded after just one bite or none. The ice cream boxes were the ones that were mostly empty.  It was decided that the saved food be given to the homeless. Kudos to the green team for doing an exceptional job!

One thought on “Ignorance at the NYU Grad Alley 2016”